Can you believe it’s August already??? Summer is flying by. But since I work full-time, year-round, I’m not that sad about. It’s not like I’m a teacher or student on summer break dreading a new school year.

I haven’t had that kind of summer break since 2010. But even though it’s been a little while since I’ve been in school I am still capable of coming up with an intelligent idea. Like an idea for today’s blog…

On Monday, when I was looking for things to talk about this week I found an article about a LEGO Ideas project gaining interest called Women of NASA. I thought it was a pretty great idea for a LEGO set and was impressed with how quickly it had received support. Here's a picture:

I’ve been on the LEGO Ideas site before from when BrickWarriors fans have notified us about ideas for which they were looking for support. Looking around the site it seemed that a lot of projects get decent interest for a month or two and then after a year, the deadline to gain enough support passes and dreams are dashed.

That was not the case for this project.

The Women of NASA idea was first posted on July 18th. By July 23rd it had reached 2500 supporters, which seems to be more than most projects ever get. Five days later it was up to 6000. On July 31st it reached 8500. When I first saw it on Monday (August 1st) it had around 9500 supporters. I decided I too wanted to support this fun and educational project so I created a LEGO Ideas profile so I could officially vote my support.

And by the next day, the 10,000 supporter threshold was reached, meaning the project will now be put up for review. (According to Brickipedia, this is only the 106th project to reach 10,000 supporters.) That is a very exciting prospect. That means a fan created project will be considered by actual LEGO designers. Here’s LEGO’s explanation of the review stage:

A "LEGO Review Board" composed of designers, product managers, and other key team members will examine the idea. We'll build concept models and determine if the concept meets our high standards for what it takes to be a LEGO product. This includes factors such as playability, safety, and fit with the LEGO brand. Every potential LEGO product goes through a process like this and must meet the same standards.

What an amazing honor for a LEGO fan. Just the thought that actual LEGO designers are using their expert skills and knowledge to consider making your idea a LEGO reality...it’s too cool.

It’s almost like being an actual LEGO designer, without the paycheck and Denmark address.

Maybe I should back up a minute and quickly explain the LEGO Ideas system.

The system originally started as a partnership with CUUSOO, a Japanese company that worked with TLG to produce community supported sets. That was in 2008. Back then an idea only needed 1,000 supporters for a chance to become an actual LEGO product. Originally based solely in Japan, the process was launched worldwide on April 23rd, 2011. In October of that year they announced that only projects with 10,000 supporters would be reviewed by TLG. LEGO Ideas officially replaced CUUSOO on April 30, 2014, but the system itself did not change.

Now let’s get into the specifics of this Women of NASA LEGO idea.

The set is based on five important female scientists that have worked for NASA. They are Margaret Hamilton, Katherine Johnson, Sally Ride, Nancy Grace Roman, and Mae Jemison. Here is the project’s description:

Women have played critical roles throughout the history of the U.S. space program, a.k.a. NASA or the National Aeronautics and Space Administration. Yet in many cases, their contributions are unknown or under-appreciated — especially as women have historically struggled to gain acceptance in the fields of science, technology, engineering, and mathematics (STEM).

This proposed set celebrates five notable NASA pioneers and provides an educational building experience to help young ones and adults alike learn about the history of women in STEM.

So as you can see, it comes with 5 minifigures representing each scientist. They are displayed in a desktop frame with their names. It also comes with vignettes depicting the following: a famous photo of the reams of code that landed astronauts on the moon in 1969; instruments used to calculate and verify trajectories for the Mercury and Apollo missions; a microscale Hubble Space Telescope and display; and a mini space shuttle, complete with external tank and solid rocket boosters.

The idea was created by Maia Weinstock, a Brown University graduate, science enthusiast and current deputy editor of MIT News. She goes by @20tauri on Twitter and Instagram and also has a Flickr page.

This is not her fist foray into designing LEGO sets.

Maia’s first submission to LEGO Ideas went over well with fans, but not with LEGO. In fact Maia’s submission was not even allowed on the LEGO Ideas site. Five days after she submitted the idea she received an email from the company saying the project had not been accepted because according to them it didn’t meet the Acceptable Project Content guidelines.

What was unacceptable about it? It was too political.

Here is what Maia submitted: 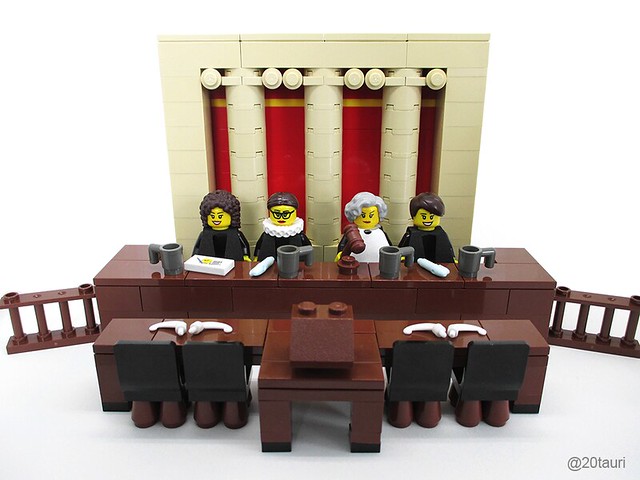 It was called the Legal Justice League and featured the only four women to have served on the United States Supreme Court: Sonia Sotomayor, Ruth Bader Ginsburg, Sandra Day O’Connor, and Elena Kagan.

According to the guidelines, LEGO doesn’t accept projects related to “politics and political symbols, campaigns, or movements.” Weinstock understands that policy, but didn’t think her project was political. She says "The U.S. Supreme Court is supposed to be separate from political considerations. People are appointed for life specifically so that they don't answer to the changing whims of politics."

But even being slightly, sort of, kind of political is too political for LEGO. And even though her idea was rejected by LEGO, Maia received a lot of support online where she posted a Flickr album depicting her original idea. She got plenty of media coverage as well, including this article from NPR: Lego Says You Can't Build That — Because Of Politics

Maia did try to resubmit the project as a Legal Justice Team that made no mention of the real Supreme Court justices, but featured three “normal” female judges.

That project was submitted on March 30,2015 and is technically still eligible to gain supporters for another 54 days, but over a year later with only 3,928 supporters so far, that is highly unlikely.

Despite Maia’s failure in getting LEGO to make either of her legal justice sets, she did get to show her original idea to the original female Supreme Court justice; Sandra Day O’Connor. I’m not sure about all the details on how this meeting happened, but Maia was at an event honoring Justice O’Connor and got this picture with her and the Legal Justice League set. 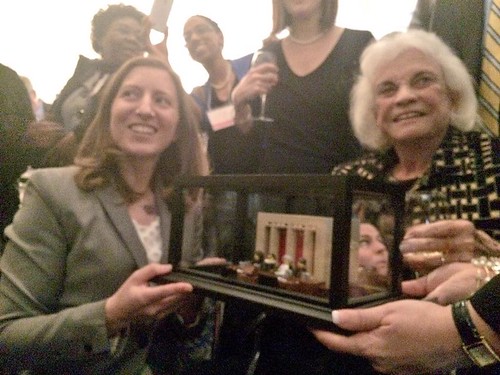 Who needs the LEGO Group's support when you have Sandra Day O'Connor herself!

You know, originally this post was going to be about LEGO Ideas in general with a slight focus on the Women of NASA project, but as I dived deeper into this project and its creator, I realized I’m not capable of simplifying this into a couple paragraphs. Maia’s creativity, determination, and wonderful feminist spirit are far too interesting for me to only mention them in passing.

So consider this a Maia Weinstock tribute blog with a slight focus on LEGO Ideas.

Thank you LEGO Ideas for introducing me to Maia who is telling the world about amazing women who have/are changing the world. Let’s hope LEGO gives the Women of NASA set some real consideration.

Unfortunately of the few projects that do reach the review stage, most are not approved by LEGO.

Women of NASA qualifies for the Second 2016 Review, which is for all projects that reach 10,000 supporters between early May and early September. A final decision probably won’t be announced until early 2017. If the project is given a go then it goes into the Development phase, which is the longest phase, meaning a potential Women of NASA set might not hit shelves until 2018. But what’s most important to me is that this set gets made, however long it may take.

Thank you for indulging me with this very specific blog topic and come back next week when I will be discussing other LEGO Ideas submissions that were not created by Maia Weinstock.

Have you ever considered submitting your own idea? Have you submitted an idea? Which potential projects are you most excited about?

Let me know and maybe I’ll talk about your answers next week.